Why the fuck didn't Obama inject the 47% remark?

This is something pundits were all puzzled about. And Obama supporters? Absolutely flabbergasted, disappointed, angry, but mainly exasperated!

As he rained blows on a befuddled Obama, it was rather puzzling as to why the rot was not stemmed with a "Governor Romney, how can you stand there and flip your flops when you are on tape vowing never to care about the 47%?"

It seemed like the perfect rejoinder. Surely that would have arrested the progress of the runaway train that was Romney last night.

Was he stunned into confusion?

Did he not remember?

Was he missing his teleprompter?

No matter what rightwingnuts think of Obama, he is not an idiot. It was not exactly a hard thing to remember. 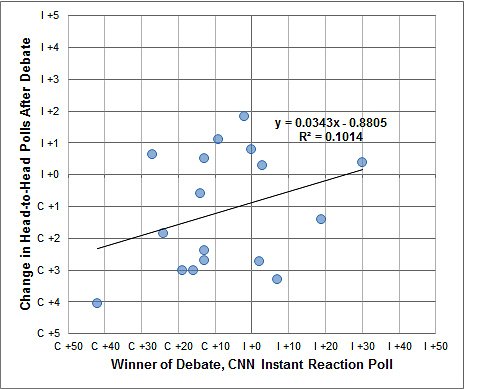 The C represents the challenger, I the incumbent.

In simple terms, there is a modest upside for the challenger, but a tremendous downside for the incumbent. To put it in perspective of numbers, if the challenger wins the debate by a 40 point margin, he stands to gain 2 points in the head-to-head polls soon thereafter. In contrast, if the incumbent wins by even as much as 30 points, he would expect to gain a 0.1 to 0.3 points in the head-to-head polls.

So as it stood, Obama had little to gain, but a lot to lose.

Plus, the first debate was focused on the most vulnerable ground for Obama: domestic policy. It also plays into Romney's most strategically advantageous turf: the economy. He could proclaim any plan or scheme he wanted, and Obama would struggle to challenge it given that he has a track record, and Mitt is free to fantasize.

So why didn't Obama play his only trump? Surely that would have at least slowed Mitt down.

In hindsight, Obama played it safe. His best bet was to not lose big, and to maximize those chances, he had to grin and bear it. Absorb the punches, remain presidential, and not retaliate like a petulant bully.

He held his nerve for the most part, scoring one small and important victory on Medicare when they discussed it.

So what would Mitt have done had Obama confronted him with his 47% remark?

We now have an answer. From Mitt himself, and he probably erred in blurting it out during his victory lap on Hannity:


ROMNEY: Clearly in a campaign with hundreds if not thousands of speeches and question-and-answer sessions, now and then you are going to say something that doesn't come out right. In this case I said something that’s just completely wrong, and I absolutely believe, however, that my life has shown that I care about 100 percent. And that has been demonstrated throughout my life. And this whole campaign is about the 100 percent. When I become president it will be about helping the 100 percent.

There, I highlighted the relevant part. But read the entire quote anyway. Does it not appear too cogent, a little too polished for Mitt to have constructed on the fly?

Yes it does, and probably because it was rehearsed for the debate, in case Obama brought it up, as he might have been expected to.

In one fell swoop he'd have, in the midst of a good debate performance, undone the damage that had devastated his campaign for a month.

Obama simply did not give him that chance. Now, Obama did lose the debate big, but the sword is still hanging over Mitt's head; only, Obama will have more opportune moments to use that card.

Perhaps it is also the reason that Obama did not indulge in any attacks that would make him look petty. No Bain, no abortion, no gay marriage, nothing.

Obama supporters should consider that there was a method to his madness of silence. Speculative, I concede, but if the polls over the next few days do not give Romney a big boost, Obama's prevent-defense would look like a stroke of genius.