Humble pie? Not yet

In a recent post covering the second debate, I had said this:

I expect the numbers to change by Friday such that his chances fall to less than 60%, officially making the race a tossup. Then it heads further south next week.

Well, it is Friday, and I am not going to go all weaselly and weasel "I did not say which Friday." What I will say is that the above forecast of chances falling to less than 60% has not happened yet, but I'll stay with it for a while. Say till next Friday. The SuperPACs seem to have gone in for a huge ad buy later than that I thought. 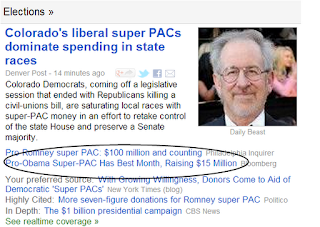 I won't move the goalposts either and now say "Gallup shows Romney leading by 6 points!"

So humble pie no, defeat yes, but soon to be reversed. If this flops too, I'll have some latte with that pie next Friday.