The Pope of Atheism

Ha! Got your attention with that clickbait of a title, didn't I?

No, there is no pope of atheism. There are no gods either. But there are people revered with a god-like status. Like, Dr. Richard Dawkins.

Dawkins is a renowned evolutionary biologist, whose works such as Climbing Mount Improbable, The Selfish Gene, The Blind Watchmaker have done a lot to introduce complex concepts to the masses. They're also the nightmare of creationists because their assertions are laid bare after a simple dissection. In many cases, their assertions have been debunked long before they were proposed, as was the case with Intelligent Design.


He rode his popularity to greater fame, wealth and started speaking out more vocally against religion.

That was A Good Thing.

That's also when things started going south. It was not how he messed up Billdo's "The Factor":

or how he struggled in debates against William Lane Craig:


but what he did elsewhere. His appearances on TV, debate forums can be excused because he is better when he is well prepared. This is also another reason why he should probably be staying away from a rapid-fire medium like Twitter. He does not seem well-suited for such situations but gets defined by his foibles.

But when he does have time, and he still commits these blunders, one should take notice. Since he has the time to correct himself, one expects him to correct himself. Instead, he doubles down belying his convictions.

Like he did with his Dear Muslima letter. A classic illustration of the fallacy of relative privation!

Or what he did with mild pedophilia. That was almost on par with the conservatives nuancing legitimate rape, real rape, mild rape, asking-for-it rape, violent rape, and other forms of rape.

And most recently, his outrage with the clock building kid, Ahmed:

Don't call him "clock boy" since he never made a clock. Hoax Boy, having hoaxed his way into the White House, now wants $15M in addition!
— Richard Dawkins (@RichardDawkins) November 24, 2015

His outrage was not over the overzealous questioning and arrest of a kid for building a clock in a pencil box (advertised as a briefcase) reassembled from a broken clock, but the fraud perpetrated by the kid on his science project.

Too bad, he could not remember the Billy Bob Thornton character from Fargo:

Mr. Rundle: Can I sit? Or did you want to kill me standing?
Lorne Malvo: Two hombres took a run at me in Duluth.
Mr. Rundle: Mexicans?
Lorne Malvo: That's the wrong part of the sentence to be focusing on.
Bashing Islam and therefore, Muslims is hip these days. Dawkins gets to do that on Bill Maher periodically, but at some point, you've to wonder if Dawkins is forgetting his advocacy of rational thinking when he indulges in lazy intellectualism like this.

So here's my suggestion. See if it works for you, when it comes to Dawkins: 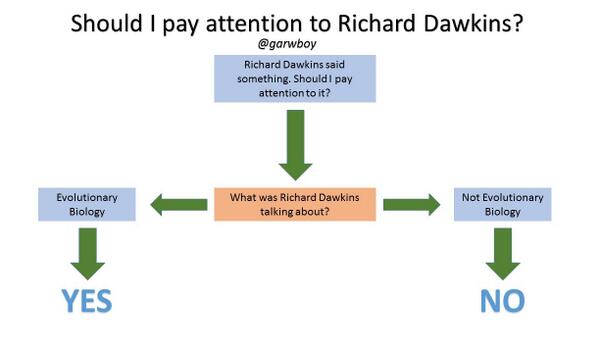