I was recently talking with a Disqus friend about the 2003 film, The Magdalene Sisters, about three young women in Ireland who were sent to the infamous Magdalene Laundries, run by Ireland’s Catholic church. The Republic of Ireland has traditionally been a Catholic country and has experienced scandals involving the church’s treatment of women and children. Ireland's Industrial School system was also administered by Catholic priests and nuns.

The first I heard of the history of the industrial schools and laundries was from the film, which is a fictionalized account of three real women sent to a laundry. Life at these laundries involved extreme physical hardship (starvation and beatings) with intense labor, as laundry was not yet mechanized in Ireland. Physical and sexual abuse from the nuns who ran the institutions was rampant (see link to Child Abuse Commission report at the end of this post), as well as sexual abuse of younger girls by administrators (both religious and laypeople) and older girls.

Why were girls and young women sent to the laundries and schools? Reasons varied from a church moral violation such as pregnancy or sex before or outside marriage, all the way to simple flirtatious behavior, or even fear that she was “too pretty” and would eventually get herself into “trouble.”


The film was based on the 1998 documentary, Sex In A Cold Climate, which is available in full on Youtube.

ONE GIRL’S EXPERIENCE
In her book, Childhood Interrupted: Growing Up Under the Cruel Regime of the Sisters of Mercy, Kathleen O’Malley tells the story of being sent to Ireland’s Goldenbridge and Moate Industrial Schools, initially at the age of five, and then again at eight. Her crime? Being the child of an unmarried mother, and then being raped and infected with gonorrhea by a neighbor.
Kathleen’s description of her time in the schools includes fear-induced bedwetting followed by beatings. Starvation and the inability to maintain personal hygiene (one bath every two weeks, accompanied by fresh clothing including change of underwear and stockings) resulted in the girls being infected with diseases ranging from head lice and ringworm to scabies.
Labor focused on heavy cleaning, with the day starting at 7 am mass and ending at six in the evening. There were several hours of school during the day, but the girls were usually too tired and hungry to benefit from lessons. 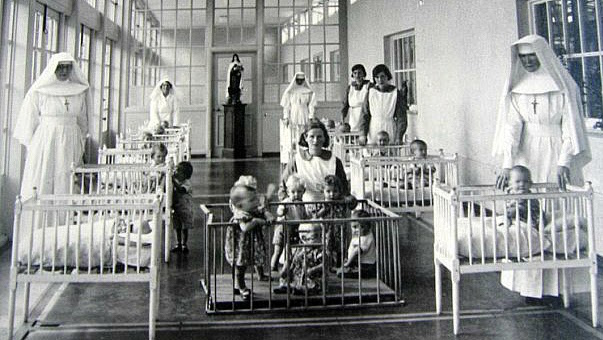 The food was horrible. On Sundays we had a sausage…full of fat and hard to chew. If you were lucky you got carrots…accompanied by a pile of watery-colored cabbage complete with slugs.

The toilet facilities were worse. The greatest shock at Goldenbridge, the thing that would have shamed every family in our [slum], was that there was no toilet paper; it simply wasn’t provided. The walls were our toilet paper. We wiped our bottoms with our fingers, then we wiped them, in turn, on the walls. It was so disgusting; long brown stains were left all the way up the wall and the smell was enough to make your stomach turn.

Regularly each week the nuns would humiliate us. We would gather in the yard and remove our [underwear]. We would then, each in turn, put them up on a pole and the other children would have to raise their hands to vote on whether the underwear were soiled or not. These unfortunate girls who had dirty underwear were beaten there and then, in front of everybody. Then the underwear were taken down off the pole to go to the laundry. I never did understand it. How could we be expected to keep ourselves clean?

SINEAD O'CONNOR
A notable inhabitant of the Magdalene Laundries (similar to the industrial schools) is singer Sinead O’Connor, who was an inmate of the Sisters of Our Lady of Charity laundry in Dublin for 18 months from the age of 14 for being labeled a problem child.

We were girls in there, not women, just children really. And the girls in there cried every day.
It was a prison. We didn’t see our families, we were locked in, cut off from life, deprived of a normal childhood.
We were told we were there because we were bad people. Some of the girls had been raped at home and not believed. 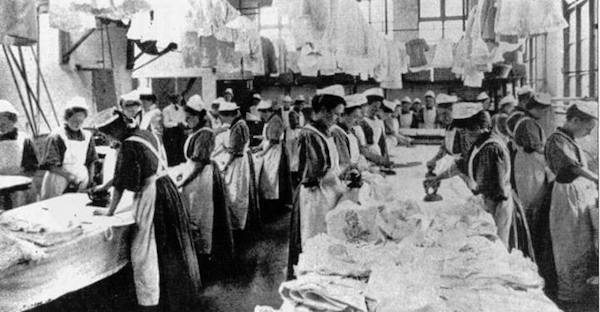 [Photo of Magdalene Laundry courtesy of Workers Solidarity Movement]
INVESTIGATION
In 1999, an apology was extended to the people who had been resident in the laundries and industrial schools.


On behalf of the State and of all citizens of the State, the Government wishes to make a sincere and long overdue apology to the victims of childhood abuse for our collective failure to intervene, to detect their pain, to come to their rescue.

An extensive investigation into over 20 industrial schools and laundries resulted in a report detailing the horrors the children (there were industrial schools for boys too, also run by the church) experienced. Some statistics and descriptions from Goldenbridge (St. Vincent’s Industrial School, 1880-1993), the school where Kathleen O’Malley lived:

Many complainants spoke of the ordeal of being sent to the landing outside the nuns' rooms for punishment...They had to line up on the landing at bedtime, after they had changed into their nightclothes, and wait to be beaten. The landing was cold and dark. A witness described the location:

... where we used to have to wait was off Sacred Heart dormitory and there was steps down and there was a big gap and there was a statue. The nuns used to sleep in kind of an alcove off the landing and the nun would come up and hit us, hit me.

A complainant from the 1950s and early 1960s said that she was very frequently sent to wait on the landing. She said that she could not recall specific reasons. She added:

They seemed to be very very menial things, like maybe you stole a slice of bread or you ate out of the rabbit’s cage or you drank water out of the toilet...

A witness who reported being raped, by a named lay ancillary worker, on a number of occasions, was silenced by threats: 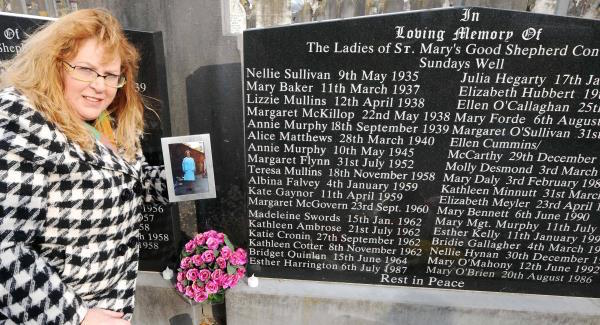 [Photo of Magdalene Laundry mass gravestone courtesy of Alliance Support Group]
FURTHER RESOURCES AND INFORMATION
If you are interested in further information about the industrial schools, here is the full report from the Commission to Inquire Into Child Abuse.
Recent updates about the Magdalene Laundries are available in the Daily Mail and from the BBC.
Posted by absolut clancy at 12/20/2015 02:39:00 AM