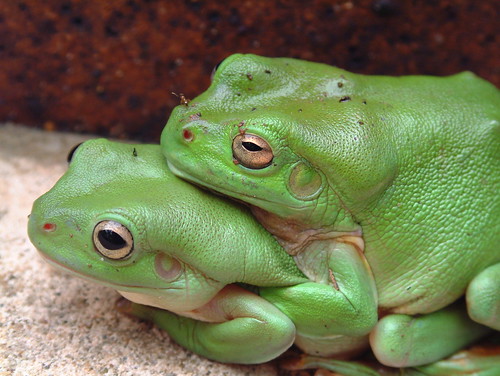 But first, a little Bible.

1 And the Lord spake unto Moses, Go unto Pharaoh, and say unto him, Thus saith the Lord, Let my people go, that they may serve me.

4 And the frogs shall come up both on thee, and upon thy people, and upon all thy servants.

5 And the Lord spake unto Moses, Say unto Aaron, Stretch forth thine hand with thy rod over the streams, over the rivers, and over the ponds, and cause frogs to come up upon the land of Egypt.

6 And Aaron stretched out his hand over the waters of Egypt; and the frogs came up, and covered the land of Egypt.

7 And the magicians did so with their enchantments, and brought up frogs upon the land of Egypt.

8 Then Pharaoh called for Moses and Aaron, and said, Intreat the Lord, that he may take away the frogs from me, and from my people; and I will let the people go, that they may do sacrifice unto the Lord.

The backdrop for those who have never read the Bible is that the Pharaoh had enslaved Moses and his homies, and the first attempt to secure their freedom under the guidance of the omnipotent and omniscient Yahweh had failed.

The earlier strategy was to fill all of the Nile with blood so that no one would have potable water (including the enslaved). That almost persuaded the Pharaoh, but as Yahweh the Omniscient knew, he reneged. On to Round Two.

What was the strategery in this one?

That’s right. Yahweh decided that it’d be cool to rain frogs all over Egypt. Everywhere. In the rivers, in their kitchens, in their beds when they had coitus…EVERYWHERE. Smited to Kingdom Come with frogs. No one could have rained more frogs anywhere at any time. Because, this was the omnipotent Yahweh. The one and only. The Big Kahuna.


But—and Yahweh the omniscient already knew this—the Pharaoh had a few tricks up his sleeve too. And a few magicians. So what did the magicians do in response? They rained frogs all over Egypt. Everywhere. In the rivers, in their kitchens, in their beds when they had coitus…EVERYWHERE. Just like Yahweh had done earlier.

(I’ll pause here to point out that the Pharaoh in response to an excess of frogs over Egypt which was his own friggin’ kingdom, gets his paid staffers to rain an equal quantity of frogs on, again, his own friggin’ kingdom, to show that he can do it too. It is on par with setting your own house on fire because someone burnt it down the year before, and you wanted to show them that you could do it too.)

After the frogathon, what happens?

Nothing. All frogs die, the whole country stinks to high heaven, and the Pharaoh—while tempted—reneges again and does not let Moses and his homies leave. Just as Yahweh the omniscient knew would happen. He not only knew this, but had hardened the Pharaoh’s heart for good measure to ensure this.

So why frogs? It may have had to do with the Egyptian goddess Heket, one with the head of a frog who ruled over childbirth and midwifery. Of course, one has to wonder why an omnipotent and eternal Yahweh would bother going to the trouble of insulting gods that supposedly don't even exist?

That’s right, he is a jealous God.

Also anyone else notice that even if you consider that Yahweh can violate the mortal laws of nature by conjuring frogs in that quantity and in those numbers, because, well he is Yahweh, it appears that it is possible for humans to do that as well. The magicians did.

The moral of the story? Yahweh resembles a clinically insane despot, so while one can treat him as amoral, there is clear intent to his madness. Consequently, I find him to be immoral. Even if it was for mysterious reasons or it is all a metaphor. If it is a metaphor, what is raining frogs over a nation that does not even change because of it, a metaphor for?