Here's a question for the theists who believe that there is a secular purpose to disallowing gay marriage in favor of "traditional marriages". Presumably, any Biblically-sanctioned marriage is a "traditional" one by definition, so that would include all of these. 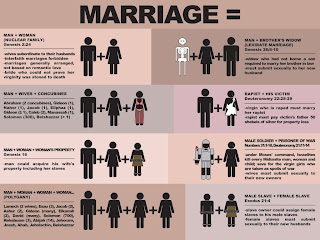 Presume that the secular evidence showed that babies with two mommies outperformed babies with a mommy and a daddy in every conceivable secular measure (intelligence, satisfaction, aversion to crime, happiness, etc). Would you then be satisfied that the only permissible marriage is between two mommies? What secular basis would you use to show that even though the evidence is to the contrary, that same-sex marriage shouldn't be allowed?

Now, we all know that the secular evidence shows that babies from same-sex marriages have no discernible difference from opposite-sex marriages, so this is all a moot point, but I think it highlights the entirety that "babies need a mother and a father" is a euphemism for "My religion thinks you're wrong". Therefore both Prop8 and DOMA fail the Lemon Test... they serve no secular purpose, and they promote some religions over others. Therefore, they are both unconstitutional.

Of course, the people who are actually arguing these cases are not going to raise the issue in this way. Perhaps that's a good strategy, but perhaps that's a bad strategy. I think there should be a "full-court press" here to get the SCOTUS to declare that defining "marriage" in ANY way is unconstitutional. However, I'd at least be satisfied with a demonstration in the courts that there really isn't any evidence that children from same-sex marriages perform any differently from children from opposite-sex marriages. In fact, all of the reputable studies show that there is simply no difference.

If the introduction of same-sex marriage into the permissible versions by law were to be so catastrophic as the Righteous Right would have us think, don't you think that such course-changing, orbit-shattering,  earth-shaking changes would have SOME observable effects?
Posted by rappoccio at 3/28/2013 10:35:00 AM

Prop 8 will be punted back, so that gay marriage does not become legal all over the US.

DOMA, clause III, will be struck down.

A question about the graph line regarding polygamous marriages (here only defined as one man plus multiple women) in terms of the known recharge rate of the male libido versus the human female:

It is well known that males, normally, aren't as sexually prolific as females, no matter how much they brag about conquests or performance.

So, in biblical polygamous arrangements, when the man is satiated, are the women then allowed to sexually recreate with each other?

I assume the women are not allowed sex with other men, to protect the husband's fathering status.


I've never seen this discussed but it must be at least a possibility - even Solomon didn't have time for 700 wives and concubines.