My son's First Amendment rights have been violated

"Why does my school believe in God?" he innocently asks.

This is immediately following work after he hands me his papers for the day from school. Among them was this : 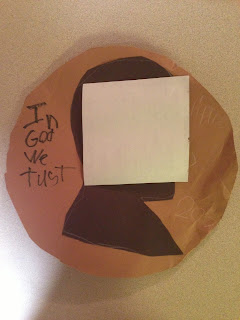 (My son's name and information blocked out, but you get the picture, this is a penny).


"Oh, son, that's just what's on the money of the US," I replied, trying to protect him from the truth, that indeed his First Amendment rights are being violated as he speaks.

"Then why do we pray to God in the morning," he asks again.

"You know... and to the Repubbic for which isstands, one nation, under God, indivizzble" he says.

"Oh, that's the Pledge of Allegiance!" I reply.

"Yeah, but why do we pray during it?"

"It's complicated, son. If you don't want to say that part, you don't have to say it. But they aren't saying you have to believe in God, it's just something that someone added recently to the Pledge." Every word of which is true.


Now, one may wonder as to why the First Amendment rights of my son ARE being violated. After all, it wasn't until 1954 that the Pledge of Allegiance added the words "under God", and since my son is allowed to remove himself and not recite the Pledge (by law), apparently that's grounds for upholding his violation of First Amendment Rights.  And "In God we Trust"? That's only been official since the same year, 1954. Both were enacted in McCarthy-Era panics to separate ourselves from the "godless Commies".

So basically, because of items added to the US "canon" in the last 30% of its existence during McCarthyism and "The Red Scare", religious groups have now convinced themselves that the US is a "Christian nation". Let me remind you of the First Amendment:


Congress shall make no law respecting an establishment of religion, or prohibiting the free exercise thereof; or abridging the freedom of speech, or of the press; or the right of the people peaceably to assemble, and to petition the Government for a redress of grievances.

Looks like an establishment of religion to me. It may be time to contact my local ACLU chapter.