Statistics and manipulation of the ignoramuses 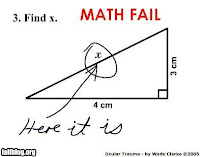 While I shall be citing a brief filed in a case involving guns, this has to do with the misuse of statistics, and not anything related to the Second Amendment. The Florida AG's office recently filed a brief in Mackey v State and it has this curious assertion:


Let's break this down into two parts. First, we have a fact: Only 5% of Florida's 19 million people are licensed to carry a concealed weapon. Then we have a conclusion: It is reasonable for an officer to assume that a subject carrying a concealed weapon is likely not licensed.

This is the kind of mathematical abuse one would expect from a gaffe, but in a brief filed by an attorney general in a court of law? Preposterous!

On the face of it, it appears fine, does it not?  If only 5% are licensed, then naturally the odds that a random citizen is not licensed is 95%. Shouldn't that clinch it?

Before we answer that, let's take into account another fact. There are roughly 36,000 police officers in the state. So out of 19 million, just 0.2% are police officers. Based on that fact, can we conclude, in a manner similar to the brief's assertion, that it is reasonable for a citizen to assume that the officer arresting him is in all likelihood (99.8%) an impostor who is simply impersonating a police officer?

Now, is it possible for a Florida police officer to be reasonable and yet assume that a subject carrying a concealed weapon is doing so unlicensed and therefore illegally?

But not on the basis of the deduction cited in the brief.

The Brief was not seeking to establish that "the other 95% (of the population) carries weapons" only that, given that CCW holders are a distinct minority in the State, the officer's suspicion that the appellant was not likely to be among them was reasonable.

The officer didn't pat down the appellant out of the blue. He made an initial observation that led him to believe that the appellant was carrying a concealed firearm.

The first consideration for any police officer worth his salt is to secure the weapon against the possibility (in this case probability) that the person carrying the weapon has no legal authority to do so. Once the weapon has been secured the officer can then proceed to investigate, in a greater degree of safety, the question of whether a permit exists.

In picking your nits, here, you are missing the largest nit of all...the appellant *was* guilty of carrying a concealed weapon without a permit.

Way to miss the very isolated, specific, in-context, with extra disclaimer that this was NOT about anything but the math part focused on the statistical claim completely!

This is about the conclusion drawn based on the cited fact in the brief.

Way to remain consistent in your unfortunate habit of ducking specific (and applicable) critiques and to remain a complete jerk while doing so!

You are nothing if not consistent!

Perhaps you missed the term "likelihood" in the comments from the excerpted case. A likelihood is not a "conclusion", it is a merely an acknowledgement of a probability.

Given the statistics quoted, it is, indeed, more *likely* than not that an officer encountering a person armed with a concealed firearm is going to find that the person is carrying that weapon illegally.

The excerpted brief drew no *conclusion* whatsoever. That's simply the skewed manner in which you have chosen to interpret it.

Thank you, I can use an example of the group of people I was highlighting with the topic.

I'll leave yours up there, since it illustrates it so well.

You are most welcome. Hopefully it will also help to illustrate for others your apparently inexhaustable capacity for pompous asininty.

@John
You're wrong. Completely and irrevocably wrong. Your hedging about "likelyhood" doesn't change a thing because you're wrong about the basic of how probabilities work and what conclusions you can draw from what data.

Let's divorce this from the context of firearms. Let's say that the percentage of the population suffering from a certain disease is 5%. A person, X, has been diagnosed with this disease.
What is the chance that X has been misdiagnosed?

As such, the statistic given doesn't allow us to draw any conclusion one way or another.