The NCAA is the Anti-Christ 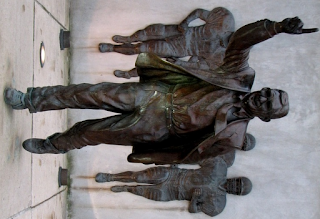 I do not know how else to explain this shocking penalty.

From the LA Times:


The sanctions included a four-year postseason ban for the football team, a scholarship reduction from 25 to 15 for four years, a five-year probation for all Penn State sports, a $60-million fine and the vacating of all football wins from 1998 through 2011.

Vacating those football wins means that JoePa, patron saint of Penn State football is no longer the record holder for the most Division I victories among coaches. That dubious hand-me-down now goes to Mr. Bobby Bowden. Feels like a déjà vu of  that press conference where Mrs. Bryant wore that huge diamond ring gifted to her by Mr. Bryant in 2003.

JoePa is dead, isn't that punishment enough?  Besides, he did not rape any kids, his vile assistant Jerry Sandusky did, who has been found guilty and will never see the outside of a prison. So why punish JoePa?

Some say that it is because he shielded Sandusky. While it'd appear that way, he did not rape those kids, nor did he ask Sandusky to rape them. Sandusky acted on his own.

JoePa was only human after all. A flawed human, who made a mistake. Several have echoed that sentiment. See here, here, and here for but three examples.

I think therein lies a colossal error in judgment. JoePa was not only not human, but truly divine. He acted in a divine fashion, just like God did.

So instead of asking him to be forgiven for being a flawed human, you should really be singing his praises for being God-like.


Is it not obvious?

What did God do? God watched as Sandusky took a shower and anally penetrated kid after kid in the shower before any other human even knew of his deeds. If God's will was for those boys to not be raped, he'd have prevented it. Just like he prevented Abe's son from being killed by Abe in sacrifice. Because God is omnipotent, and his will is always done, it is ridiculous to suggest that those boys were raped against God's will. They were only raped against their will, but note that Sandusky's free will was not violated in any way.

So not doing anything was clearly God's will. Even as he watched, and watched, and did nothing and would have if he had wanted to. JoePa did exactly that. Upon knowledge of his assistant raping kids in the showers and elsewhere, he too could have stopped Sandusky, or if he was not as powerful as God, he could have had someone else do it for him.

But no, he instead chose to obey God's will. So why crucify a man who acted just like God, and is dead? Should we not let God decide his fate? Remember that "judge not lest ye be..." aphorism?

Why does that not apply here? Why punish all those other students who are now going to be short-changed for no fault of theirs? It is not as if those kids are going to be un-raped. It is not as if Sandusky or JoePa will even be able to rape kids and cover-up respectively.

This, despite God's will being done.

Oh wait, maybe this is God's will too. Maybe God wanted those kids raped, JoePa to break the record, and just when he is about to die, have Sandusky prosecuted, strip JoePa of his record posthumously so that only his family suffers the indignity, and penalize Penn State such that some who had nothing to do with this also suffer.

After all, He does work in mysterious ways.

"They ask me what I'd like written about me when I'm gone. I hope they write I made Penn State a better place, not just that I was a good football coach." - Joe Paterno

Because if Paterno had used the power of his office to STOP Sandusky before he buttfucked other kids...do you see where I'm going with this?

God doesn't act because of The Principle of Indeterminacy. It's really quite simple...