A rapid redux! We just saw a story about the results of the American Dialect Society's 2015 Word of the Year vote, and a few nights ago I noticed this relevant post on the  Grammarly blog, titled, “3 Cool Ways English Evolved in 2015.”
According to the Society vote, the 2015 Word of the Year was they, used as a gender-neutral third-person singular personal pronoun. Read on for more on gender-neutral language from Grammarly.


Trend 1 - Portmanteau, or word mashups
In 2015 the portmanteau officially arrived. Lewis Carroll coined it  to mean a suitcase with two compartments, as described in the original Grammarly source article. Grammarly says, “Portmanteaus are nothing new, but lately they’re ‘spiviralling’ out of control. That’s a new one right there; we can’t break their stride.”
Portmanteau is now used to describe two words merged into one, creating a new, unique meaning. It’s also known as a word blend, and many are already in common use. Brunch, motel, workaholic.
Lewis Carroll used his created word type in Through the Looking Glass in 1871, in his poem “Jabberwocky.” When Alice is confused by the poem’s seemingly-nonsensical wording, Humpty Dumpty explains a word in the poem’s first line.

('Twas brillig, and the slithy toves / did gyre and gimble in the wabe.")

Grammarly also notes that word mashups are a trend of recent years, including business buzzwords (oh, my favorite - not!) like guesstimate and phablet.
What about people who text while walking? Pedtextrians (pedestrians + texters), or wexters(walkers + texters)? I like the suggestion to Oxford Dictionaries: moblivious (mobile + oblivious). (My spell checker is really hating this post!) 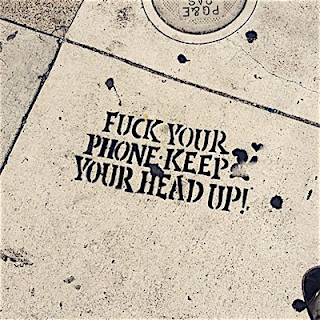 In December, Oxford added twitterati (Twitter + literati). Celebrity names and couples are commonly blended, such as Brangelina and KStew and RPat.
A Twitterati even posted a portmanteau: 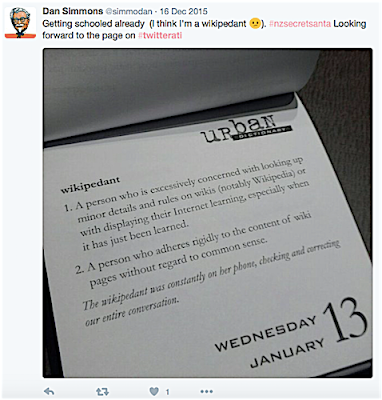 Trend 2 - Mx., a gender-neutral honorific
The new honorific Mx. (pronounced “mix”) is being added to the traditional Mr., Mrs., Miss, and Ms. It’s been used in the New York Times, and added to dictionary .com and OED. The title has been adopted by transgender individuals, non-binary people, or those who don’t wish to reveal their gender.
According to Jonathan Dent, OED assistant editor, the honorific first appeared in the American magazine Single Parent in 1977. At that time, Ms. was entering the mainstream. The Royal Bank of Scotland took an early lead in adding Mx. to its forms.
Trend 3 - Delicious words
Food is trending now: the way we eat, what we eat, where it comes from, and who it comes from. The internet is key in these trends, as food bloggers and foodies find each other on social media.
Food blogger Josh Friedland has compiled a dictionary called Eatymology: The Dictionary of Modern Gastronomy. Oxford Dictionary named locavore - someone who eats only locally sourced food - as its word of the year in 2007, but it’s only been included in OED in December 2015. [How often do they update OED? Does anyone here know? I don’t have it.]
Also added to Oxford Dictionaries in 2015 are wine o’clock and beer o’clock - when a person decides it’s time for one of the libations. So it doesn’t have to be five o’clock somewhere anymore.

In honor of one of my favorite musicians, David Bowie, I'm including some music which seems fitting for the topic of language evolution: "Changes," and "Under Pressure" (together with the late great Freddie Mercury). RIP, David.

Email ThisBlogThis!Share to TwitterShare to FacebookShare to Pinterest
Labels: Gender-Neutral Language, Word of the Year