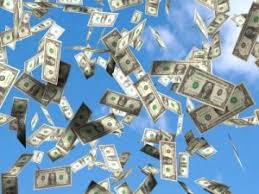 Yup, no longer is anyone restrained by being unable to legally brib--- I mean, contribute larger amounts of money-speech to anyone. Watch out, fascism might get way ahead of the cross, people!

For the record, I am in favor of all such limits being removed. So good job, Scalia, Thomas, Roberts, Kennedy and Alito! This is a good thing, because it should cost a lot more than a measly billion dollars to buy the presidency like was the case in 2012. Now, if they could also require immediate and complete disclosure of all donors, this would be perfect.


With the ruling, we continue to chip away at the long entrenched status quo from the grassroots — a status quo that has kept challengers, better ideas, and new entrants to the political arena mostly locked out, ensuring that citizens are able to contribute to multiple candidates or causes who share their views only provides further support to a system in which 'We the People' hold the ultimate reins of power.

Baggers of the world, now you get to find out how invaluable you were when you were used by the Republicans. They thank you for your support and no longer need to fund your inefficient astroturf movement. Take solace in the fact that Democrats will now almost certainly lose control of the Senate in 2014. Nothing like a bunch of  rich patriots calling the shots, eh?
Posted by Citizen1729 at 4/02/2014 09:11:00 AM