It's not because he is the first non-white President.

It's not because of The Affordable Care Act (aka Obamacare).

It's not because of any activity (or lack thereof) in wars (Afghan nor Iraqi).

It's because of a simple fact that the dangerous measure by the US House of Representatives to shut down the government and risk default in order to defund the ACA was ultimately defeated because it is beyond the scope of Congressional authority. 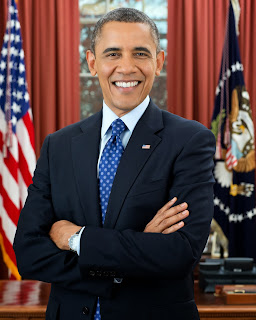 This is a pretty big deal, I think. In recent years, it has become more and more "posh" politically to simply obstruct the opponents you disagree with, even if they concur with and represent the will of the people who elected them. This was a potentially disastrous precedent, and it was quite possible that the POTUS could have simply caved in and given some mealy-mouthed pandering to his opponents, as Democrats in the past were known to do.

Instead, he (and others) simply waited until the political inevitability occurred : that the people of the US actually DEPEND on their government for a good portion of the... ahem... governance of their lives. This took a good deal of strength of will to weather this public storm of discontent. In the end, the proper Constitutional procedure won out as expected : when the majority of people vote for something, that thing should be implemented. Full stop.

To put some of the reactionary "Keep the government shut down, we don't use it anyway" nonsense in perspective, I was watching "Sleepy Hollow" recently (guilty pleasure) and Ichabod Crane (reimagined as a Brit-turned-Revolutionary War soldier transported magically to modern times) is apoplectic about the 10% tax on "baked goods" that he sees on his doughnut receipt. "We should be rioting in the streets!" he laments. "We went to war with Britain over 2.5% tax!" His cynical partner simply tells him to stop the nonsense, this is how things are done.

However, it highlights a few things about the differences between then and now :

1. It's actually inaccurate, the Revolutionary War wasn't really based on taxes, but having taxes without a say in a representative government.

2. In 1775, the number of things you could get from your government were limited. They didn't maintain roads. They didn't inspect meat. They didn't put out fires. They didn't respond to natural disasters. They didn't advance science. They didn't put someone on the moon. They didn't provide a Global Positioning Service satellite fleet. They didn't care if you got sick. They ignored you if you lost a limb during combat (although, they would in fact give you a license to beg!). They had no idea what "post traumatic stress" even was, much less how to deal with it in soldiers.

What ended up happening, I think, is that the US people got a dose of reality. All of the behind-the-scenes things that the Federal government is actually doing (and what we're actually paying for) were finally brought to light to a populace that was partially suffering from the delusion that their tax dollars are predominantly going to feed lazy people that don't feel like going to work (actually, most of the dollars are going to your parents/grandparents in their Social Security checks and health care). I think some of them finally realized that what their "discretionary" tax dollars are actually going toward are things they actually enjoy about our government.

Instead of caving into the sentiment of the opposition, though, Obama has cemented his place as the guy who showed the US population what they actually needed a Federal Government for to begin with. I hope the message got across.

Now : on to fixing the US budget. This is actually relatively easy, but here, the Democrats actually have to give some way. "Entitlement" spending (Medicare and Social Security) make up the bulk of the budget. There is no economically feasible way to balance the budget that ignores these things. The GOP just got a black eye for their shenanigans over the budget. If the Dems aren't careful, they could get a black eye if they can't erase the red in their ledgers in the next few months.

I guess I'll just sit back, get some popcorn, and watch.