Snowden : Not what I expected from a Will Smith film

... although maybe he's Gene Hackman's character in his early days. 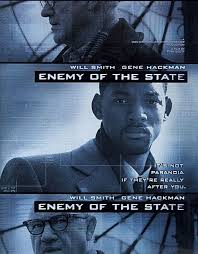 Here's the skinny, though, peeps. This film was made in 1998. That's 15 years ago, the time of dialup modems and before the word "google" became a verb. Even then, metadata was being collected (fact often follows fiction, but really... the JOB of the NSA is to collect and monitor data).

But here's another thought : it was also being collected in 1792. Tracking where information came from and where it is going to (i.e. "metadata") is exactly what we used to call a "good postal service". The analogy is as follows : what you have in your letter is data. What you have on the envelope (displayed for the entire world to see, and actually given away to someone to send somewhere else for you, by reading that information) is metadata. This has never been viewed as "private" information before.

USPS : Collecting Your Metadata Since 1792


The question is, why is electronic metadata thought of as private now, differently than when Ben Franklin invented it? Just because there's a lot of it? Perhaps because people thought it was something different? Rational people can disagree as to how much privacy is necessary here, and how much security trumps it, but what we cannot disagree on (because it's a fact) is that we've been handing over metadata to the US Government (and our phone companies, and our search engines, and our social media) for a whole lot longer than a few weeks ago after the "whistle was blown" on the NSA. In fact, the US Government has been doing this around as long as we've HAD a Fourth Amendment.

So is Edward Snowden a hero? A patriot? A traitor? Maybe he's even all of those things, but, frankly, mostly he's a moron. Risking one's life and freedom by breaking the law to tell people what they really should have already been aware of is not the brightest plan one can come up with. Perhaps the majority of people are so far in the dark that they really DID think their snail mail/email/Facebook/Google/Verizon/Sprint metadata were ignored by the US Government for the last 250+ years when they were in plain sight.

If that's the case, then maybe Snowden threw himself under the bus so that the rest of the US could wake up and start using their brains about cyberland. Admirable? I certainly wouldn't have done it. It was rash and the words "martyrdom complex" spring to mind. But hey, the guy at least seems genuine. Maybe genuinely unintelligent, but at least genuine that he thought breaking the law was the best way to go about this particular gripe.

I remember getting my first email account in college in the 90's. Even then, there were disclaimers that what I was sending around was not encrypted, was vulnerable to being read by third parties, and that one should never, ever, ever, ever transmit any sensitive information (credit card numbers, passwords, social security numbers, identifications, etc). That was in 1996. I have still taken that fine print to heart, 17 years later. Posting things on facebook? Yeah, that's public to the universe unless you tell it otherwise, it's not even hard to get at. A second-rate hacker can bang out something that could access your "web" of metadata on facebook in probably a day or two. They always have been able to do this, well before Edward Snowden decided to tell all about it.


The actual question is : was the metadata that they collected, collected legally? You shouldn't trust the government to do this correctly, and there the constructive debate actually begins. How much scrutiny did the FISA court actually give? That's a valid question. Was it a rubber stamp? Maybe it was, and maybe it wasn't, and the valid arena isn't to break the law, ruin your life, run away to Russia and hope for lifelong asylum. The valid outlet to ask this question is to your Senator or Representative! Trust me, they actually do care what you think. In fact, most of their day is trying to figure that very thing out. So when you call them to make an appointment by phone, in person, at their office, whatever, they usually send someone very qualified to speak with you, and if a lot of people say the same thing, they may actually even remember this and bring it up the next time they're on Capitol Hill. Try it! You'll be astonished how easy it is. Contrary to some cynics, the US actually IS a democracy where your voice (yes, YOUR voice) is heard. It may be frustrating to deal with a big machine like this, but as my grandfather once told me, quoting Tip O'Neill (probably unconsciously) :

"All politics are local, daddy-boy."

So, if you want to have a different mechanism in place, get yourself to a phone or your email box, and tell your Congressperson! You may be outraged, scandalized, flabbergasted (although I'll be honest : you should have seen this coming years ago), but there is actually an outlet for your frustrations that won't land you in Siberia for the rest of your life in self-imposed exile.