Move over Pascal, I have a better wager 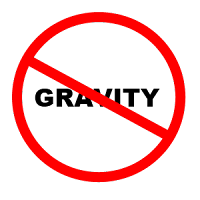 It is better to believe in levitation than gravity.

We all know that Newton's theory of gravity keeps us firmly on earth because of the enormous mass of Earth compared to ours.

But it is only a theory.

I'll demonstrate that it is best not to believe in it, and while I'll not present all the arguments, I'll state the most compelling ones; they ought to be enough for people with a dose of common sense:
So, stop believing in gravity, and believe in levitation instead. If your belief is true, you'll levitate.