GOD, No! by Penn Jillette 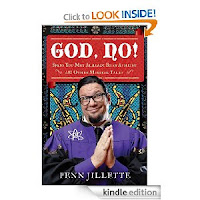 This post is dedicated to the memory of Furlan Primus aka Magicus, an atheist, magician, and online friend, who died last year on July 26, 2010, and who would have loved this book. --Kitty Hundal

Penn, the other half of the Penn and Teller duo has written an entertaining and enlightening book which regales the reader with great stories viewing the world through the eyes and experiences of a godless heathen.

Stories that I think most of us atheists can relate to with a chuckle and a nod.

He’s broken the book down into 10 sections which contrast the Christian 10 commandments with 10 atheist suggestions along with often hilarious vignettes illustrating what happens when the world of the godless collides with the world of the religious.

Read about the atheist stripper who contributed to the de-conversion of an Orthodox Hasidic Jew by explaining science (evolution) during a lap dance. (Only in New York you say? And sorry guys he doesn’t give her name or the name of the Strip Club, Heh.).

And then there’s the Vegas (where else?) atheist “baptism” featuring a pool and a naked Extreme Elvis with a great voice, big belly and needle-size dick.

Combine the humor with serious and intelligent points like:

"The last time I asked anyone if they were Jewish was many years ago at MIT. I don't remember why, but I asked a genius geek who was showing us around the Media Lab, the same genius geek who joined us for AB's atheist communion, if he was Jewish. He responded, "No, I'm an atheist." His dad, as a young child, had fought and escaped from the Nazis, but that didn't make his family Jewish. He didn't see it as a racial or cultural question but a theological question. He didn't care what Hitler would have considered him; he was an atheist. He was no more a Jew than I was a Christian. That answer was important to me. It was that moment when I understood George Clinton suggesting one nation under a motherfucking groove. It was an inspiration." --Penn Jillette

This book is, in my opinion, a definite buy and would make a great gift for any atheist friends (and for in or out of the closet, going through the de-conversion process religious friends).

I don't remember her name, but the strip club was Lace in Nyack, NY. But as Penn said, I got lucky.

"...one nation under a motherfucking groove."

Thanks for the recommendation!